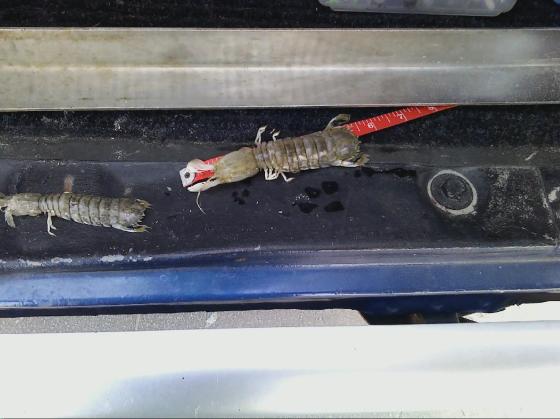 A couple of mantis shrimp that were killed by the sudden drop in water temperature.

Today CJ polhamus was driving the Stone Harbor NJ beach hunting for striped bass when he noticed hundreds of mantis shrimp in the surf line. He got out of his beach buggy van for a close look and found half of the shrimp alive.They were very lethargic and more than likely not going to make it.
Hundreds of laughing gulls were seen feeding on peanut bunker in the same conditions, off of Matt’s landing road in the Delaware bay. Tomorrow’s low tide could give us a better look at the damage. Hopefully the kill is not to extensive. 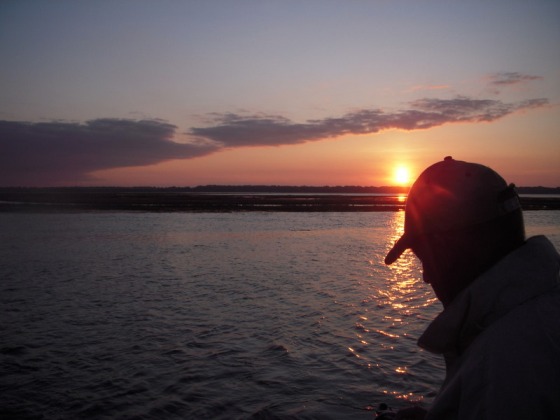 The closing of the last United States  lead processing  plant will force all lead to  be shipped in from over seas, with the exception of recycled lead. The closing is a direct result  of  a 1000% increase in new  U.S. DEP requirements. Do not blame President Obama, the rules were  set in motion before he was elected.   The cost of processed lead in the United States will skyrocket.  Hunters, fishermen and the target shooter will feel a direct hit. Lead jig heads and ammunition  are expected to rise. The U.S. military stock piled ammunition  at a historic rate prior to the closing. This caused an ammo shortage and a record price increase  in itself.  However,  the military induced  price increase  will pale in comparison of what is to come.  Aviation fuel requires 2g lead per gallon. The extra cost will push jet fuel cost   and without doubt increase  airfare.  The smelting plant closing will reach far beyond increasing the cost of outdoor sports. It will create a redistribution of wealth, pushing more U.S. dollars to china and peru.  The smelting plant was in business for a 120 years. Now it becomes a victim of the American manufacturing blight,  joining the  U.S. steel plants in Pennsylvania and the auto manufacturing plants of Detroit .

A few basics to pay attention to when fishing for Mako sharks: 1) do not leave the dock without a Roffer's' report. I get one even though I have up to date reports from commercial fishermen. If you are fishing with a captain that does not know what a Roffer's report is chances are you are only going for a boat ride! 2) If you are going to compete in the tournaments invest in a Mako magnet they work! I have seen sharks, tuna and blues come right up and put their nose on the thing. 3) Makos return to the same wreaks and edges ever year, seek out information as to what areas hold makos when the conditions are right. 4) a crew with a plan. Every crew member should know how to leader a mako, gaff, shoot and run the boat. 5) the first boat on the structure has a significant advantage. Leave early and run hard! 6) stay on the structure! not almost on it ! 7) make sure your bait is alive and your chum is fresh.
Loading Comments...
Comment
×