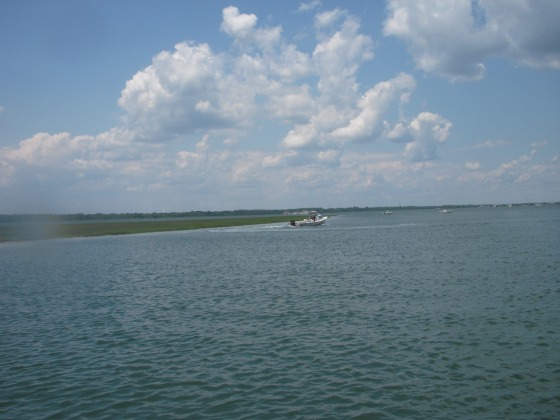 Snakebit  is the word of the week from my dock. I was out for two hours today in the back bay flounder fishing and I did not catch a keeper or a through back flounder. I fished an area that I have caught limits of flounder in the past at this time of the year. The water temperature was 79.1 degrees visibility was poor about 5 ft.. Dr. Gary and Ed T. are making me look bad as they continue to catch keeper flounder in the back bay. They had five keepers today to 22″. Jon returned to his dock with a cooler full of trigger fish yesterday he claims they are a good eating fish. I heard that a few yellow fin where caught just short of the Baltimore. They were in the 40 pound range. I also know of a red fish being caught in the back bay a few days back. Every year a couple are caught around the inlets of Cape May co.. Last year my Uncle was surf fishing in late August and hook a very big red fish at Stone Harbor point. A crowd gathered as he fought the fish, he managed to get the red fish into a gully but was not able to beach him. My uncle tried to wrestle the red fish on to the beach drawling laughter from the  crowd that had grown to about fifty. In the end the red fish got away. Wayne travels in from Kentucky to fish and hit the beach every summer.