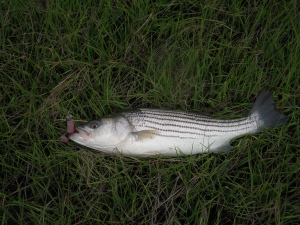 Dr.Gary on the double touch out of Stone Harbor marina continues to catch keeper flounder in the back bay.On Saturday he put five  5 keepers in the box. Dr. Gary is one of the top back bay flounder fisherman in NJ, if not the best in the State. He has caught numerous flounder over ten pounds in the back bay. His boat recently won the Grassy sound flounder tournament with a 6 pound plus flounder. Lucky for the winners of the duke of fluke tournament he was not entered or he would have taken the heaviest flounder in that tournament also. The water temperature has been fluctuating from 59 degrees to 80 degrees in the back bay depending on the wind direction. When the water temperature dips the striper bite turns red hot. There has also been some weakfish caught and released this week, one 22″ that was caught and released and a six pounder that was put in the cooler.