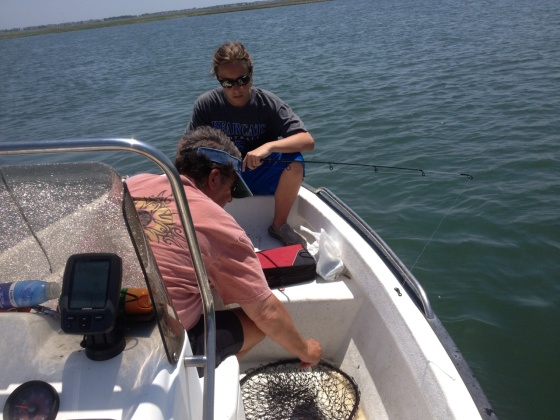 There is a tremendous difference between New York/North Jersey and the Delaware Bay /South Jersey waters.
The water temperature between North Jersey and South Jersey , especially in the back bay areas is significant at times . This in-itself makes it impossible to set fair flounder regulations managing north and south Jersey as one management unit. The species found and size, also indicates a significant difference. For example, in South Jersey we catch black drum, speckled sea trout and red drum* . These species are not found in North Jersey, New York or Connecticut in fishable numbers. However, they are found in Delaware, Maryland, Virginia and South Jersey. Delaware and South Jersey fishermen fish the same exact spots. Like the Delaware Bay and atlantic ocean spots like the old grounds. Yet, they are held to different regulations. Delaware fishermen enjoy regulations that are in tune with the area, that includes a 16 ” keeper size and a 365 day season. South Jersey fishermen are held to regulations based on science derived from the New York area, that calls for a 19″ keeper and a much smaller season, that opens at the wrong time. Summer flounder management and the South Jersey tourist economy will be significantly enhanced with regional option 3A. The State of Delaware has benefited economical at the expense of New Jersey, due to insufficient summer flounder regulations.

For the reasons above, I urge you to support and lobby for region option 3A see below:

Regional Option 3-Split New Jersey Option 3A This alternative proposes the State of New Jersey be split in half, establishing north and south portions. The northern portion of New Jersey would be included with the current Northern Region of New York and Connecticut while the southern portion would be included with the Southern Region of Delaware, Maryland and Virginia. The line of demarcation would occur around Little Egg Inlet with Great Bay included in the Southern Region keeping New Jersey counties intact. Table 6. Regional Option 3A with example management measure Example bag limit:
North Jersey, New York and Connecticut * 19″ 5 fish 128
South Jersey, Delaware and Maryland* 17″ 4 fish 365 days