We had just finished baiting and setting the rods, when the clicker on the reel started to scream. It was June 9th. I can’t remember the year off-hand, but every detail of the battle with the big mako is burned into my memory . The mount of that Mako, welcomes you at the entrance of my driveway. The story of that fishing trip !
It was a real effort to carry all the tide runner weakfish off the south jetty of the USCG base. It was the first week in June 1992.
It was predawn, at a spot we call the stakes, the fish hit and made an uncontrollable run. It was June 1. The mount of the 15.8 pound weakfish hangs on the left side of my mantel.
We limited out on summer flounder in the back bay for a 11 consecutive days, in June 2008.
I had just bought a new 24′ Grady  Offshore. The first trip we headed to slaughter beach Delaware for drum fish. The first fish caught on the boat was a 92 pound black drum, it was the first week in June 1997.
These are just a few reasons, I feel in love with fishing in June.
Historically June has been the most dependable fishing month in Cape May County , NJ.
However, with continuous hard south-west wind coupled with large swings in the water temperature, made for tough June fishing this year. There were a few” days when the conditions lined up and fish were caught. I did manage to catch my biggest tide-runner weakfish in decades this spring. Hopefully, the law of averages will bring blue bird days, for the rest of the season. 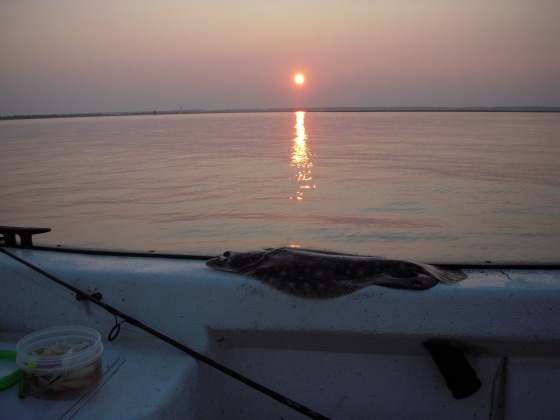