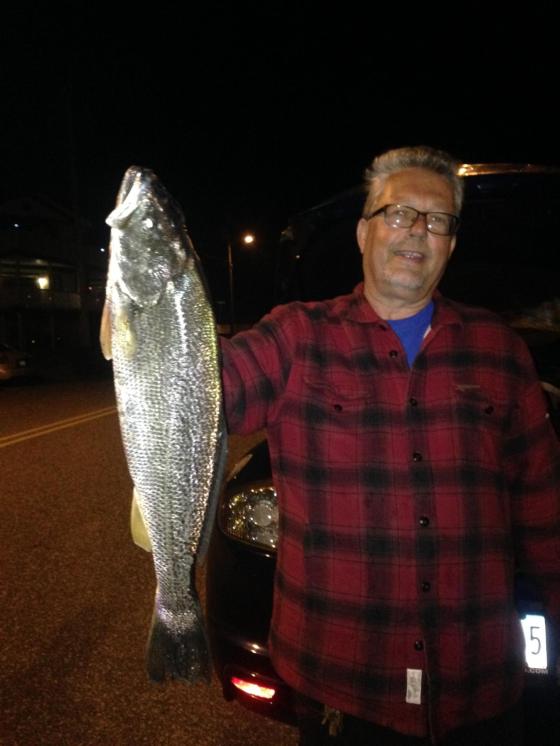 Harry shows one of the first tide runner weakfish of 2015.

The first weakfish to show, we call scouts. They push ahead of the main body of fish. They offer excellent clues, to where the best spring weakfish bite will occur. 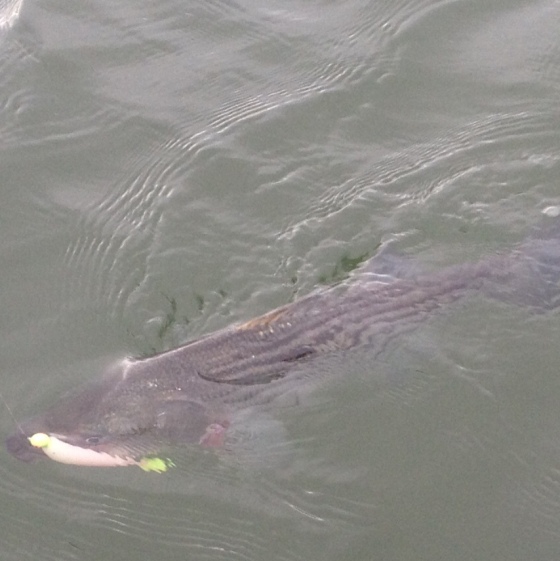 One of today’s stripers takes a close look at my lure.

Today felt so much like fall, I decided to forgo flounder fishing  to hunt summer stripers.  It was refreshing to find them with very little effort. I was sloppy in my approach to the spots , but I still hooked up at most locations. In one  area they were feeding on peanut bunker and they had no interest in my favorite paddle tail. What is exciting is the amount of bait fish I continue to see in the area this year.  If the numbers of bait fish hold, this fall striper fishing will be much better than last year. 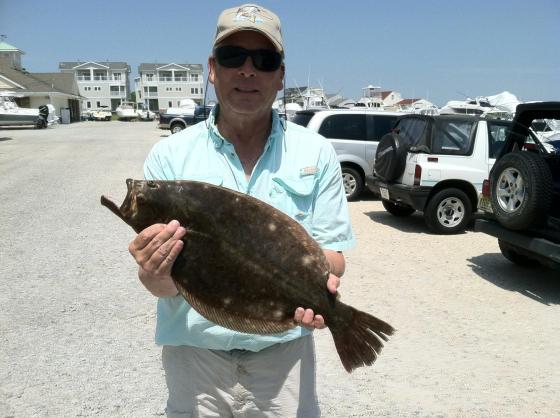 Captain Gary  remains zeroed in on the back bay flounder,  his heaviest  this morning was 6.5 pounds. A six  pound flounder  usually takes first place in the  Grassy sound marina’s back bay flounder tournament.

I caught two 20″ keeper back bay flounder  today. I fished for 40 minutes. The water temperature at the top of the tide was 63 degrees,   5 -10 SW  wind and the water clarity was excellent.

The weakfish bite has slowed due to the spawn. The weakfish could be seen swimming around the structure but they were not interested in any lures.  The stripers picked up the slack. Wayne caught a quality short striper on a smoke colored zoom. His first fish of his annual Jersey fishing vacation. 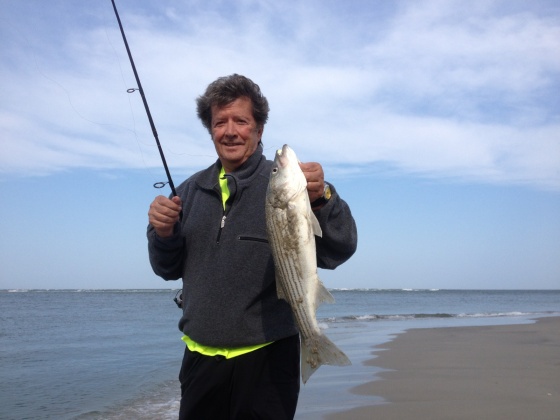 Wayne with a striper he caught while targeting weakfish. 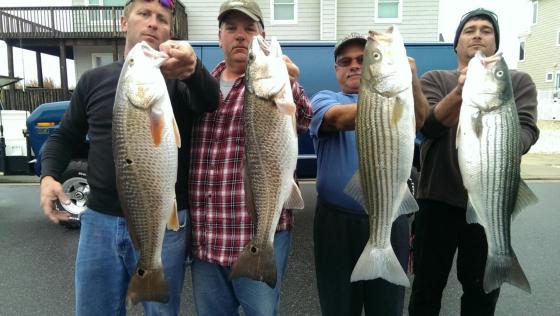 Mark , Jeff,  CJ  and Ben  continue to out fish everybody in Cape May County, NJ. They  are pictured here with the  few fish they chose to keep today. The red drum just made the upside of the slot limit, the  striped bass 30″ and 33″.  Their success  is the result of knowledge , passion and energy. 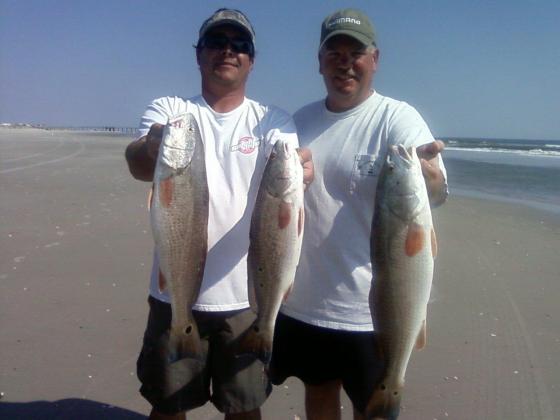 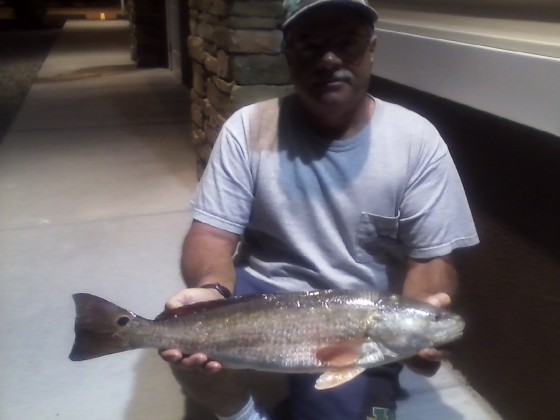 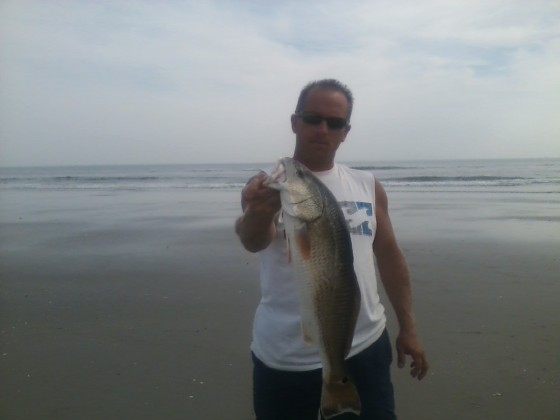 Mark is high hook of this  elite group, this is one of his many 2013 New Jersey red fish.

The following is a news release from the Atlantic States Marine Fisheries Commission:

In its report to the Atlantic States Marine Fisheries Commission’s Weakfish Management Board, an independent panel of scientists endorsed the 2009 weakfish stock assessment for management use. The Review Panel confirmed that stocks are at an all time low and current fishery removals are unsustainable under existing stock conditions. It agreed with the stock assessment’s conclusions that weakfish abundance has declined markedly, total mortality is high, non-fishing mortality has recently increased, and the stock is currently in a depleted state. Given these findings, the Board initiated the development of Draft Addendum IV which will propose a range of options to reduce fishing mortality, including complete harvest moratoria and limited bycatch only fisheries.

“While the Board has been aware of the decline in weakfish landings over the past ten years, conflicting signals in the stock assessment models employed in the past confounded decision making. This peer review panel found the methodology acceptable and agreed that the stock is in dire condition,” stated Board Chair Roy Miller. “Given the condition of the stock, the Board has decided to accelerate its management process and prepare a draft addendum for public comment in early fall. Upon considering public comment and final action on the addendum, the Board will have the option to implement the addendum’s measures through emergency action this November.”

The weakfish stock is depleted at an all-time low of 2.9 million pounds (1,333 metric tons), far below the proposed biomass threshold of 22.4 million pounds (10,179 metric tons). At this stock size, recent fishery removals (landings and dead discards combined), estimated at 1.9 and 1.8 million pounds in 2007 and 2008, respectively, represent a significant proportion of the remaining biomass. While the decline in the stock primarily results from a change in the natural mortality of weakfish in recent years, it is further exacerbated by continued removals by the commercial and recreational fisheries.

Natural mortality has risen substantially since 1995, with factors such as predation, competition, and changes in the environment having a stronger influence on recent weakfish stock dynamics than fishing mortality. Given current high natural mortality levels, stock projections indicate that the stock is unlikely to recover rapidly, even under a harvest moratorium. In order to rebuild the stock, total mortality will need to be reduced, although this is unlikely to occur until natural mortality decreases to
previous levels. On a positive note, juvenile abundance surveys indicate that young-of-the-year weakfish continued to be present in numbers similar to previous years, suggesting that recruitment at this point has not been severely limited in spite of low stock size.

The Board has placed the Draft Addendum on a faster timeline than standard addenda. Staff and the Plan Development Team will prepare a draft for Board review and consideration in mid-September. If approved, the draft will then be made available for public review and comment. It is anticipated that the majority of states will be conducting public hearings of Draft Addendum IV in October; a press release will be issued on those hearings once the information is available. The Board will meet again in November to consider public comment and take final action on the Draft
Addendum. Under Commission procedures, the Board may opt to implement the Addendum under emergency action, with approved measures taking effect immediately upon Board action.

ASMFC Vision: Healthy, self-sustaining populations for all Atlantic coast fish species or successful restoration well in progress by the year 2015.

Take  time to read the Atlantic States Marine Fisheries weakfish management board meeting minutes. http://www.asmfc.org
Here is quote from
And, finally, I would just like to say, as I said before,

no matter what happens with the peer review in June

the board needs to remember that weakfish is in a

with that particular panel on why it is there. One of

the main things that they said was that predation may

be maintaining the population at low levels without

having contributed to the original decline in the

We agree that overfishing was the problem in the

eighties. We have used management to get the stock

started back in an increasing mode during the early

nineties and mid-nineties, and then all of a sudden it

dropped back down. Now, we definitely agree that it

was overfishing early on. We’re saying the split

happened in the early thousands that predation is the

main focus of a problem out

out there, and it is

continuing to maintain those levels and we can’t

seem to break through it to move forward. That’s it

for me. Like I said, I tried to do this real quick.

I was in contact with Nichola Meserve Fisheries Management plan coordinator today via email. She informed me that in light of the dramatic weakfish stock decline the ASMFC weakfish board initiated an addendum. The draft addendum will include  a range of options to severely  restrict the harvest of weakfish, including a moratorium on harvesting weakfish. The addendum is being fast tracked and could be approved in November.
MR. RUSS ALLENS’ report to the weakfish board:
I was standing on my dock today about 11:00 AM,  I decided to take boat ride to see how the water looked. It was dirty but not as bad as yesterday and a lot cleaner than I expected.I had 10 minutes to fish. I caught two keeper flounder. A good sign considering the water condition. The water temperature was 67.3. 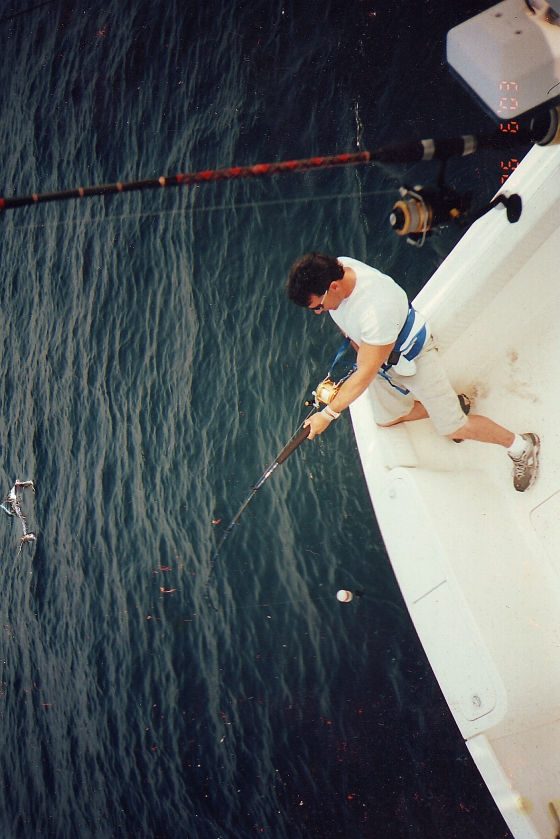 Congratulations to the winners of Jim’s Bait and Tackle Mako Tournament! The crew on the  Lora Mae had the heaviest Mako 165.5 pounds. The crew on the Warden Pass was second with a 162 pound Mako. Miss Edna Jane crew was third with a 160 pound Mako.  If you weighed a shark in at Jim’s Bait and Tackle during the tournament let me know.
,
If you are thinking of flounder fishing tomorrow forget it. The water is very dirty and the flounder are not feeding! It is going to take a week of no rain to clear the water up in the back bay.The water temperature was 67 degrees today.
I had one of the top fisherman in Cape May County, NJ
aboard my boat today. ED Teise has won more weakfish tournaments than anybody alive in Cape May County, NJ. We unleashed the dock lines at 6:30 PM. Today we were looking for flounder. We ended up with seven keepers to 23.5 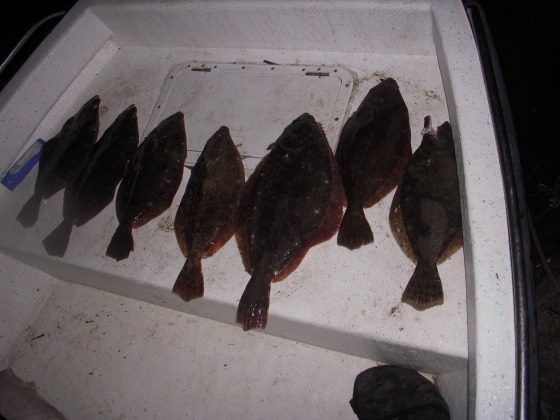 “. It was a little chilly for June, the up side  no bugs.Water temperature was 63 degrees. The water was not as clear as I like it. I like to  flounder fish hard  while the flounder  are available in the back bay.  This is  a very good week to hunt for weakfish. I know the numbers are down, but if you want to catch weakfish this week traditionally is a top producer. A few weakfish were checked in at Jims’ B&T this morning one was 34”. They had seven weakfish all together. 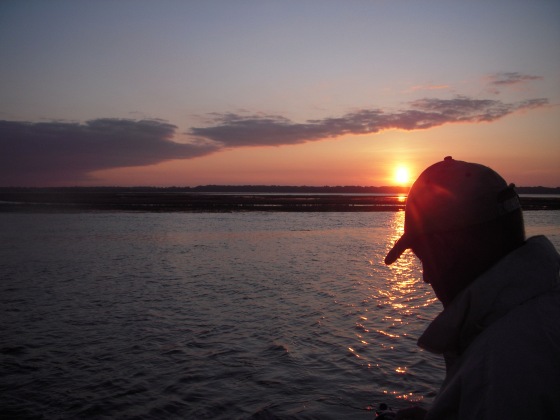 A few basics to pay attention to when fishing for Mako sharks: 1) do not leave the dock without a Roffer's' report. I get one even though I have up to date reports from commercial fishermen. If you are fishing with a captain that does not know what a Roffer's report is chances are you are only going for a boat ride! 2) If you are going to compete in the tournaments invest in a Mako magnet they work! I have seen sharks, tuna and blues come right up and put their nose on the thing. 3) Makos return to the same wreaks and edges ever year, seek out information as to what areas hold makos when the conditions are right. 4) a crew with a plan. Every crew member should know how to leader a mako, gaff, shoot and run the boat. 5) the first boat on the structure has a significant advantage. Leave early and run hard! 6) stay on the structure! not almost on it ! 7) make sure your bait is alive and your chum is fresh.
Loading Comments...