Jonathon and Wayne traveled in from Louisville Ky., arriving last week. Back bay fishing for founder was on the top of the to do list. Usually they schedule a June Cape May County vacation, to catch the best of the Back  Bay flounder bite. However, this year Jon was  in Hollywood CA., busy with his part in the upcoming movie {Me Again} during June. He has a significant part in the movie, it is going to be a blockbuster, look for the trailers around the New Year. If you are Back Bay Flounder fishing in August, keeper flounder are much tougher to catch apposed to June fishing. The total amount of keeper flounder Jonathon and Wayne boated during their August vacation was 14 keepers to 23”, in addition, they had numerous short flounder. We fished an average of two hours, centered on the top of the tide, five trips. The water temperature fluctuated during the week between 63 degrees to a high of 76 degrees. The water clarity was excellent {tropical} I could see my lure on the bottom, from the boat at 19’.  I will be keeping a snorkel onboard for the rest of the summer to take advantage of the super clear water.  I should mention that every flounder trip this week included keeper flounder, not bad for August back bay fishing. 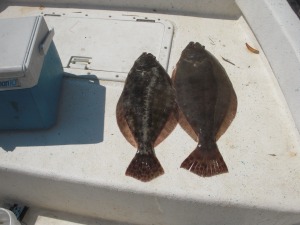